Dunia is the most powerful country in the islands, in a world ruled by kings.  The capital is Lyxton, a  model of a prosperous 17th century city.  The Dumas dynasty has ruled Dunia for a hundred years, rescuing it from a war-torn past of feuding warlords. The greatest warriors of all: the Dumases themselves, who won the crown by marriage and force. While the monarchy is solid, the lords rule their feudal estates in self-interest, their support for the crown contingent on the lords' ancestral rights to plunder their own regions. 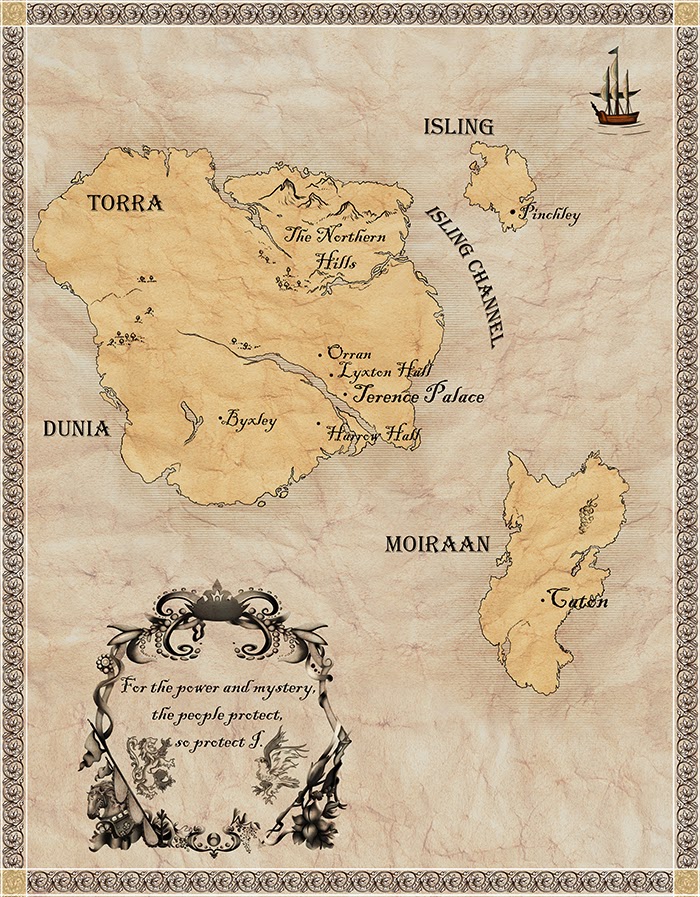 Beyond Dunia is Torra, a coastal region attached to Dunia and ruled by Aramanda's mother, the beautiful Lydia de Paramount, who married Francis Dumas. Upon her death, Francis retained her lands, and acquired the second kingdom. Aramanda, born with the mark of three crowns, is said to inherit her father's land of Dunia, her mother's land of Torra, and a third kingdom.

The kingdom of Moiraan is ruled by the Starner family. Mark Starner's crown is loose upon his head, and his son, Phillip, hopes to win the hand of the Dunian star, Aramanda Dumas, to solidify his family's hold on the rich region of Moiraan.

Isling is the dark, mystical place of exile where George Dumas, Francis' father, and his powerful and mysterious wife, Francis' mother, Elisabeth Allot, lived during the years of banishment by George's brother, King Edourd I.

Terence Palace, Aramanda’s home:
"Terence rose before him, mystical in its perfection, its white towers rising over the landscape in dignified resolve.  Milton pulled his horse to a stop and gazed at the palace, the clouds drifting over its spires, Aramanda’s standard fluttering above the turret.  A dream upon the landscape, distant and unreachable.  He could not imagine her living elsewhere."


Harrow Hall, Edourd’s residence:
"Harrow Hall was smaller than the other palaces, stark in appearance and practical in its use.  The structure stood high above the thick trees, a sun-baked amber in the clear morning air. The grooved turrets and slanted windows, and the massive stone walls formed a formidable stance against the uncertainty of royal life."

"Edourd felt the warrior’s eyes that followed him up the staircase, absorbed willingly the power of George’s persona that clung to the stones, lurked in the weapons and trophies of the great duke, his grandfather, who had ridden from Isling like a conqueror to become king."

Lyxton Hall, The King’s Palace:
"Chadwick leaned out of the carriage, and gazed up the palace windows. A cascade of tumbling sunshine warded off the weak of heart; carved figures jutted from the building, their beastly faces spitting tongues at intruders.  He could not imagine Milton living here."

"Milton’s first impression was one of respect, for everything seemed serious to him: the beaten silver hunting trophies and regal tapestries, the ornamented furniture with its beastly animals carved deep into the black wood, heavy velvet curtains that unfurled from lofty origins and rested upon the marble floor, and thick oak doors that led to mysterious royal places locked from common view.  It was solid and impressive, with a commanding ambiance, like Milton supposed the man who lived there to be."

"The tapestries commanded the walls: monstrous ships guarding the harbour, soldiers with cannon at attention in the fields, warlords on watch, the remains of those who dared to contest bloody at their feet.  Francis relished the passion of their promise, a future of stability borne out of strife."


Isling:
"Ancient prophesy said that the greatest monarch would come from the darkness of mystical origin, that there was a parchment from the Northern Hills that told of this. But Isling was a forbidden subject, and its mysteries, its reputation for nefarious arts a fable as far as Edourd could tell. Whatever George and his wife, Elisabeth, had done while they lived there, Francis clearly preferred it to be left out of the family history."

The Court:
"There was a twisted order at the Dunian court that similarly wove in and out of itself in brilliance and glamour, controlled and intricate, and deeply intoxicating. It was as if only Francis Dumas could gaze at the labyrinth from this vantage and see logic to the swirling passages. All others must walk within, carefully traversing the path, unlocking its puzzle corner after corner, or else become lost in the maze."

Dunia and the People of Lyxton:
"King’s Day was an event, Aramanda realized, for which they waited all year, and their unrestrained passion for a monarchy that sustained them, had risen them from the dark ages of a war-scarred past.
She gazed to either side, acknowledging the crowd, who cheered her progress, waving like madmen, caps and kerchiefs in the air, flowers in eager hands. Oblivious to her suffering, the people scurried alongside, tossed her perfumed blossoms, their joy-filled voices a wall of noise that surrounded her."
"People in the city were always moving; they had purpose, created the wools, the wines, the crops that made Dunia prosperous, her father powerful. Studying them in their daily routine, she pictured the industry that spun from their action as they went about their routine, unaware that their Princess watched them, like bees in a bottle."

Moiraan:
"Francis put a hand to the porcelain globe that stood in the shadow of the casement, and ran a finger over the yellow land mass southeast of Dunia. Moiraan. Just thinking about the prosperity of it, the rich soil, bountiful fish and livestock, the orchards, the vineyards. Not like the rocky soil of Torra, but more like Dunia herself, an island, divided by one narrow channel from its neighbour. He thought of his daughter. Placing his palm over Moiraan, he put a spin to the globe, watched it dance in dizzy exhilaration, round and round."